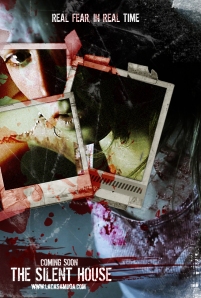 While we were impressed with the finish quality LA CAS MUDA achieved using nothing but sticky back plastic and old Fairy liquid bottles, we felt the film itself fell somewhat short. Shooting in one continuous 80 minute take (has that been verified yet?) is pretty cool, but it was 80 minutes of a girl crawling about on all fours moaning and groaning………hold on! That sounds pretty cool.

What the hell do we know?!

As reported over at Bloody-Disgusting Chris Kentis and Laura Lau, the creative team behind 2003’s OPEN WATER, obviously saw the film’s potential and decided to remake it as THE SILENT HOUSE.

In rapid fashion, and with the help of ELLE DRIVER (that’s the production outfit behind one of this year’s Sitges favourites RUBBER, not the Hattori Hanzo sword-wielding Daryl Hannah from KILL BILL), the team have wrapped in time to show the film in the Midnight Section of Sundance 2011 next month. That’s a mere 8 months after Gustavo Hernandez’s original first attracted attention at Cannes.

And before we go, has anyone seen star of  THE SILENT HOUSE Elizabeth Olsen and THE WIRE’s Felicia “Snoop” Pearson in the same room? The hair braids aren’t fooling us.