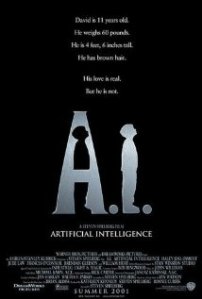 Though not yet officially announced on the festival website it looks like Sitges will this year pay tribute to the Steven Spielberg film ARTIFICIAL INTELLIGENCE:AI which marks its 10th anniversary this year.

This actually appears to be a continuation of the festival’s love affair with Stanley Kubrick rather than a hat-tip to Spielberg’s disappointing sci-fi effort. This post over at Sitgesbarcelona.com makes reference to the Brian Aldiss short story “Super-toys last all summer long”, which served as the inspiration for the Kubrick developed script that eventually ended up in Spielberg’s lap.

If previous festivals serve as any guide then the organizers will likely only afford the film itself a small corner of the program, however, its inclusion as the festival’s theme does suggest another sci-fi slant to the program which is something to get excited about.