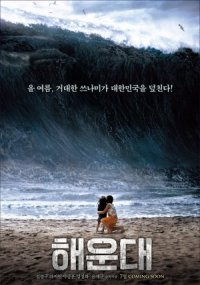 Dir. Yun Je-gyun; 2009; South Korea; Action/Drama; Sol Kyung-gu, Ha Ji-won, 120 mins
Billed as Korea’s first disaster movie, HAEUNDAE has already struck Korean box office gold and is rapidly rising to the top of the all time charts. There’s a pinch of “the day after tomorrow” here and that’s no surprise seeing as Hans Uhlig (one of the digital team on that film) brings a touch of Hollywood special effects to Korea’s Busan coastline.
The film appears to remain very much Korean however, both in its location and the people populating it (including regional dialect and in-jokes). Our love for Korean cinema has never been secret, and not just for the Park Chan-wooks or Ji Woon-kims of that world, however, there’s perhaps a touch too much of the over sentimental character development here for our taste and I’m guessing we’d already be tuned out before the film’s big event finish.
THE HOST is another example of Korean cinema which struck a home run with the local audiences but struck out for us.
IMDB entry for Haeundae
Wise Words:
SciFiJapan on Haeundae
Hollywood Reporter on Haeundae