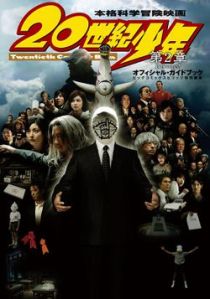 Having seen the first installment of this trilogy at last year’s festival, and considering the fact that both chapters 2 and 3 are to be screened at Sitges this year, I’m tempted to go for my 20th Century Boy-Scout’s trilogy badge and claim bragging rights at having seen all three installments of a film that’s likely to have limited appeal beyond Japanese shores or the original Manga comic fan base.

As with chapter 1, this installment runs well over the 2 hour mark and is stuffed to the brim with more characters (with associated flash backs) than I could care to mention or fathom. This no doubt stems in part from the substantial Manga source material and a need to satisfy detail hungry fans of the comic, however, as a non-fan, I found the first installment hard going and my appetite/curiosity more than satiated by the time the final credits rolled.

Chapter 2 has already performed mightily at the Japanese box office and the culmination of this story, along with the true identity of “Friend”, is no doubt something many have eagerly anticipated, and perhaps rightly so. I’ll have to be honest (scout’s honour) and admit that I haven’t given it another thought since this time last year so I may just settle for reading the spoilers as and when they surface.

Don’t let my ignorance dissuade you however. Check out the Chapter 2 reviews below and this simple, and therefore probably far more useful, abridged synopsis of the trilogy over at Asian Fanatics.