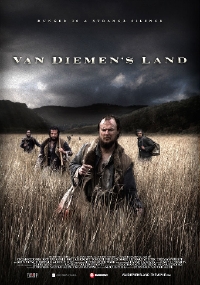 A potential fence-sitter. Difficult to glean much from a 45 second trailer but I do like the look of this film (see official site below). Shot with a RED ONE digital camera there appears to be a distinct and deliberate match of colour and tone with the film’s theme. It could be hoped too that the director would use the contrasting characters of the film’s natural setting, vast tracks of harsh wilderness and oppressive entanglements of dense tropical forest, to heighten the individual and collective obstacles the characters must overcome.

104 minutes is, however, a long time to be watching distressed individuals traipse through dense undergrowth so I fear a significant onus will be on the script, direction and the actors to deliver an engaging and watchable film.

Perhaps we’ll give this a miss based purely on the all too lingering memory of watching men take a walk in the woods in TRIGGER MAN back in Sitges 2007. Or maybe we’ll give it a chance as we loved THE DEAR HUNTER, RAMBO, APOCALYPSE NOW, and CASUALTIES OF WAR.

You, meanwhile, can decide for yourself….