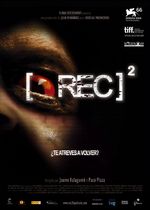 Having only recently begun its festival roll-out there’s not yet a massive amount of the Blogosphere consumed by [REC]2 reviews but I’m guessing that will soon be corrected.

We actually missed [REC] at Sitges 2007 (it wasn’t showing in the pub for some reason) where it scooped an armful of awards, however, having subsequently caught it on DVD we’re certainly interested in what the sequel has to offer. Visually identical, it would be good to see [REC]2 on the big screen, in a darkened theatre, with a thousand rowdy Catalonians vocalizing their full support.

The original premise gave [REC] some added weight but there’s a suspicion that we may be served up more of the same in [REC]2 with nothing but tack-on embellishments to distinguish it from the first. Then again it is a sequel, and a real-time continuation one at that, so perhaps it’s a case of “give ’em what they want”. If that’s another hour and a half of low light jerky-cam footage then so be it.