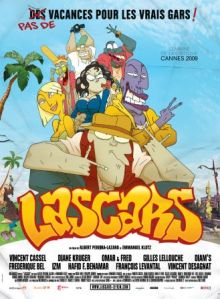 LASCARS too uses the unconventional pairing of animation and adult theme in its portrayal of life in Parisian “slums”. Developed from an original series of vignettes shown on French TV’s Canal Plus, this feature length version takes familiar characters and elements and sprays them on to a larger canvas.

The film’s hip-hop, urban culture theme and graffiti visual style would certainly appeal to team CS but this would be an hour and a half of French animation. However, the creators have gone to lengths to ensure the original “language” is transferred/translated (to English) here so as not to lose one of  the original concept’s strengths, its realistic portrayal of Parisian street/slum life.

This gets an initial green light from me, but with the caveat that humorous vignettes are one thing, rolling with “interesting” animated French characters for 96 minutes is another matter. The books are now open on a Shaun walk-out.