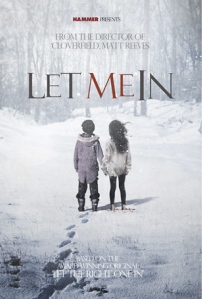 Like most fans of the original, when it was announced that they were remaking Let The Right One In I was horrified. The original is so subtle I figured that unless they brought in the right director, there was no way a big budget Hollywood remake would work.

Unfortunately, the guy who they announced as director  was Colverfield’s Matt Reeves. It doesn’t take a genius to figure out that the director of a film where a giant monster invades New York, and all the characters are so annoying that you actually want them to die, doesn’t really instill that much confidence.

Watching the trailer hasn’t really changed my outlook on this film. It seems as though they’ve tried to make it into a full-on ‘horror’ film, which for me is kind of missing the point. For me the the great thing about the original was the subtle intricacies of the relationship between the two children, the horror (of which there was actually very little) was a very secondary consideration.

I’m still not sure if we’ll go and see this. I think that if I’d never heard of the original and I saw the trailer, I’d be all over it. Unfortunately, I have seen the original and I can’t see that this will even get close to it’s brilliance.

Official Site For Let Me In

IMDB Site For Let Me In

Cinemablend on Let Me In