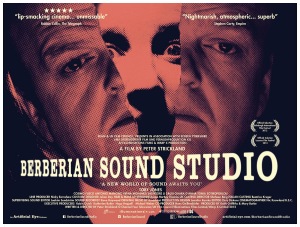 Even though we’ve included it here on the subs bench this might not make our final squad. A lot of the positive chatter about this film and it’s breathtaking homage to the art of this type of filmmaking is coming from the serious film critic club. Much of the film’s finer appreciation could be wasted on us so we may just respectfully decline and drag our unappreciative butts to the nearest pub.

Beyond Hollywood on Berberian Sound Studio